The “Silent Drama” was conducted under the co-ordination of Mr. Dipak Oli and chaired by the vice-coordinator of SOWREC Ms. Alisha Sharma. Dr. Thakur Silwal, campus chief of IOF, Pokhara Campus was invited as the chief guest of the program and Mr.Rishi Baral, (Conservation officer,NTNC-ACAP) was invited as the special guest. Similarly, faculty members of IOF were there as the guests. Altogether 80 people including students as well as teachers from IOF, Pokhara were present in the program. Drama was performed by 13 peoples including executive members as well as general members of SOWREC. The feedback we obtained from audience has really encouraged us to come up with such programs in coming days. This silent drama was new concept to bring awareness about nature and wildlife conservation. Also, the drama enhanced the hidden acting talent of drama performer. They were very much thankful towards SOWREC for providing such opportunity. 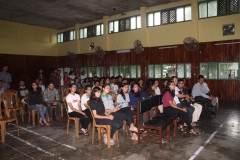