DIRGHAMAYA UPADHYAYA MEMORIAL Endowment fund set up at the campus

In order to pay tribute to mother late Dhirgamaya Upadhyaya and acknowledge the supports received during the tough time from the faculty, staffs and students of the campus, Prof. Chirinjivi Prasad Upadhyaya, former dean of the IOF and former campus chief of IOF Pokhara campus has donated NPR 200,000.00 to set up an endowment fund named “DIRGHAMAYA UPADHYAYA MEMORIAL ENDOWMENT FUND” in the campus.  In signing ceremony of the MOU and cheques handover function amidst the presence of distinguished personalities in December 30, 2022, Prof. Upadhyaya briefed the contents of the MOU and pledged to increase the fund in future.

The campus had officially prepared and implemented the working guidelines to attract establishment of scholarship & research grant support from individuals/institutions in FY 2078/79. This provision has facilitated to set up the endowment fund. The part of the interest earned from the fund will be provided annually to the top scorer among the female students to support her project paper work of 8th semester in B. Sc. Forestry program

The campus is deeply thankful to Prof. Upadhyaya for his noble and initiating first of this kind work for the campus and believes that this will motivate to other generous and IOF loving individuals/institutions to will follow his path. 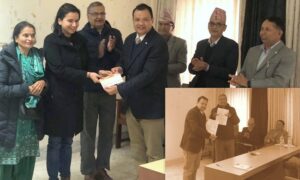