The Institute of Forestry, Pokhara campus participated actively in the annual mountain festival organized by the Nepal Mountaineering Association (NMA) at the International Mountain Museum, Gharipatan in December 10 & 11, 2022. The United Nations declared December 11 as International Mountain Day in 2002 to raise awareness about mountains and their significance and the NMA has been celebrating its annual mountain festival on the same day since last 7 years.

Under the guidance and coordination of Mr. Rabindra Adhikari, Asst. Professor, the eight different student-run green organizations actively involved in disseminating information about the college, course contents, facilities and other general inquiries of visitors at its stall. At the event, a variety of college prospectuses, bulletins, posters, and arts and crafts from green organizations were showcased and distributed. Additionally, Ms. Shila Gurung, a third-year student of BSc, represented the campus in a panel discussion session titled “Women Move Mountain” along with five other panelists from different colleges in Pokhara.

The campus would like to express sincere gratitude to the organizer as well as Mr. Rabindra Adhikari and all the involved students of the green organization for their valuable time and contributions. 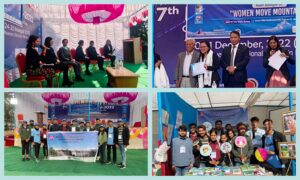