Similarly, Emerging Player was awarded to the first year students to motivate them. Mr. Dipendra Saud (among boys) and Ms. Sushmita Khadka (among girls) were announced as the Emerging Player. Also, Ms. Pooja Dumre of Team Champions (Girl) and Mr. Santosh Parajuli of Team Stunbazz Falcons (Boys) were chosen as the Best Player of the tournament for their magnificent performance in the entire league. The campus chief, Prof. Binod Prasad Heyojoo was the chief guest in the final ceremony who awarded the finalist with medals and certificates along with the cash prizes.

The campus extends gratitude to the organizer and in particular the coordinator, Mr. Aashish Aryal for accomplishing successfully the event. 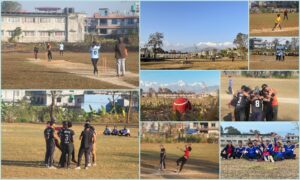